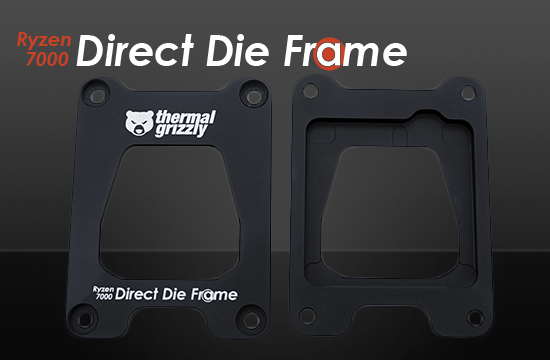 The AMD Ryzen 7000 Direct Die Frame is a CPU mounting frame for mounting Ryzen 7000 processors without the integrated heat spreader. By omitting the heat spreader, the CPU cooler can be mounted directly on the processor's chiplets, allowing for significantly lower temperatures during operation. This is not only interesting for extreme overclockers on the hunt for records, but also for gamers and content creators.

For gaming PCs and desktop workstations, cooling the processor is important so that they are not slowed down during rendering operations, for example, or enable the highest possible FPS when gaming. Silent PCs for multimedia applications also benefit from better heat dissipation from the processor. In addition to a good cooling solution, PC enthusiasts use "delidding" CPUs to optimise heat dissipation.

When delidding a CPU, the heat spreader of the processor is removed. Often this is done to replace the thermal conductive materials used by the manufacturer with higher quality thermal pastes or liquid metal such as Thermal Grizzly's Conductonaut before the heat spreader is remounted. With the so-called "direct die", the heat spreader is completely omitted so that the base plate of the CPU cooler has direct contact with the CPU.

When the CPU cooler is mounted directly on the CPU chips, the heat that is generated during operation of the CPU is dissipated directly to the cooler and does not first have to be transferred through the heat spreader. This makes heat dissipation more efficient and the CPU is cooled better. The purpose of the AMD Ryzen 7000 Direct Die Frame is to protect the exposed chiplets of the Ryzen 7000 CPU. Without a direct die frame, the CPU's function can be impaired by the contact pressure of the CPU cooler. Here, problems with the RAM in particular are very common and, in the worst case, the CPU can become unusable.