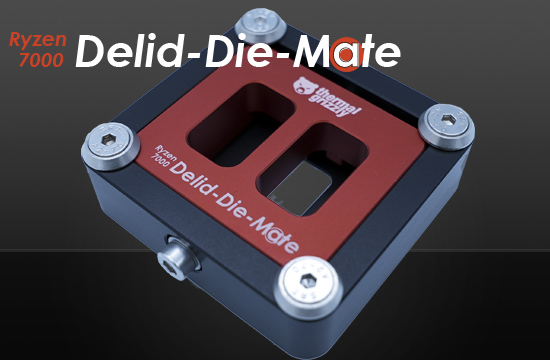 However, as the Ryzen 7000 processors are soldered, this is not an option as removing the indium solder would create too large a gap between the IHS and CPU dies. Therefore, the Ryzen 7000 CPUs are primarily delidded for possible mounting of the CPU cooler directly on the CPU dies. In the case of Ryzen 7000 CPUs, this would be the I/O die (IOD) and one or two CPU dies (CCDs), so called chiplets. By omitting the heat spreader and mounting the CPU cooler directly on the die, experience shows that temperatures can be reduced by 10-20°C if liquid metal such as Conductonaut is used as TIM. Corresponding tests were carried out by the content creators and Tech-YouTubers Roman "der8auer" Hartung, a professional overclocker and engineer, and Jason "JayzTwoCents" Langevin.

Since the chiplets of the Ryzen CPU could possibly be damaged when the CPU cooler is mounted using the Direct Die method, as has happened with old AMD processors of the Athlon XP generation, among others, we offer the Ryzen 7000 Direct Die Frame. This covers the edges of the PCB and reduces the risk of damage when mounting the CPU cooler on the Dies.